One of the reasons that got me really interested in the project is that, I’ve been looking around alternatives to UIKit. Not that I’ve anything against UIKit, but I seen how things out of hands with UIKit pretty soon. And ComponentKit was on my radar for quite some time.

Also, I’m a huge fan of C++, but so far the only ObjectiveC++ I’ve written was just to glue ObjectiveC with C++, like I would start with an AppEngine.cpp and forward all the call from the AppDelegate to the AppEngine. ComponentKit on the other hand, seems to be making full use of C++ and ObjectiveC in the same space. Which sounds weird enough for me to at least try this thing out.

Building an App with ComponentKit

I will be building the PhotoApp that I try to build every now and then but this time with ComponentKit. What the PhotoApp does is that it starts with a loading screen while we fetch a list of photo and when we are done we render them on screen. Next, whenever a user taps on the cell, we display the details screen with the photo in more details and some text.

This is pretty simple app that touches many parts of most of the apps out there. Okay, let’s go!

The first step is to checkout the repository from github The recommended way is to use Carthage. It’s been a long time since I’ve used Carthage, personally I like to manage all my dependencies manually, which is know is not a popular opinion these days. So, let’s give Carthage a shot.

Following the instructions from https://github.com/Carthage/Carthage#quick-start, this is now my Cartfie looks like:

Now, I can run ` carthage update`… and it does not work

Life is too short to read a log message. Time for plan B; Manually building the workspace.

The very first thing one notices after the setup is that how much time it takes for the ComponentKit to compile. I’ve been using Swift mostly at work for past 4 years now, and there compile time is unacceptable, and that is why whenever I’m working on something on a Friday evening, I pick something blazing fast, which ObjectiveC is, but ObjectiveC++ is not.

Whenever I’m working on an ObjC project, the very first thing I do is to toggle the TREAT_WARNINGS_AS_ERRORS flag to YES. And I wish every other project does the same, specially a project as widely used as ComponentKit.

Okay all code set up and ready to go, the first challenge is to figure out where to start. To be honest, I’ve no clue, so I’ll looking at the sample WildeGuess project. Like, WildeGuessCollectionViewController I’m also planning to start out with a UICollectionView, so that is a good thing.

For our case, we already know at the load time that there is going to be one section, which contains the loading view. We need to provide that information as a change set, as the data source starts with zero sections.

Before I get my hands dirty with building components, I would also like to plug in the other thing data source might be interested in. And that is a event callback for whenever a cell starts or ends displaying is invoked we want to update our data source with this information. In our case this is the willDisplayCell and didEndDisplayingCell of UICollectionViewDelegate

With our basic data source set up, we can now focus on providing the first view. Usually when we start our layout with a UICollectionView the first thing that comes to mind it to have a bunch of UICollectionViewCell and register them and later whenever UIKit needs to render them on screen, we paint them. With ComponentKit things are different, we probably only need to create a UICollectionView and leave the rest to ComponentKit. The starting point of the entire component system seems to be this CKComponentProvider which is a protocol with a class method, and the context is provided as an argument. Neat.

So, my first attempt would be insert a NSNull and render an PHLoadingComponent for that model

Creating a component does not seems as trivial if you have been writing apps for some time. I know I’m not creating a view from scratch because that is the job of ComponentKit, I probably have to only provide the data for the view. But what data? Let’s start with a prebaked component CKLabelComponent 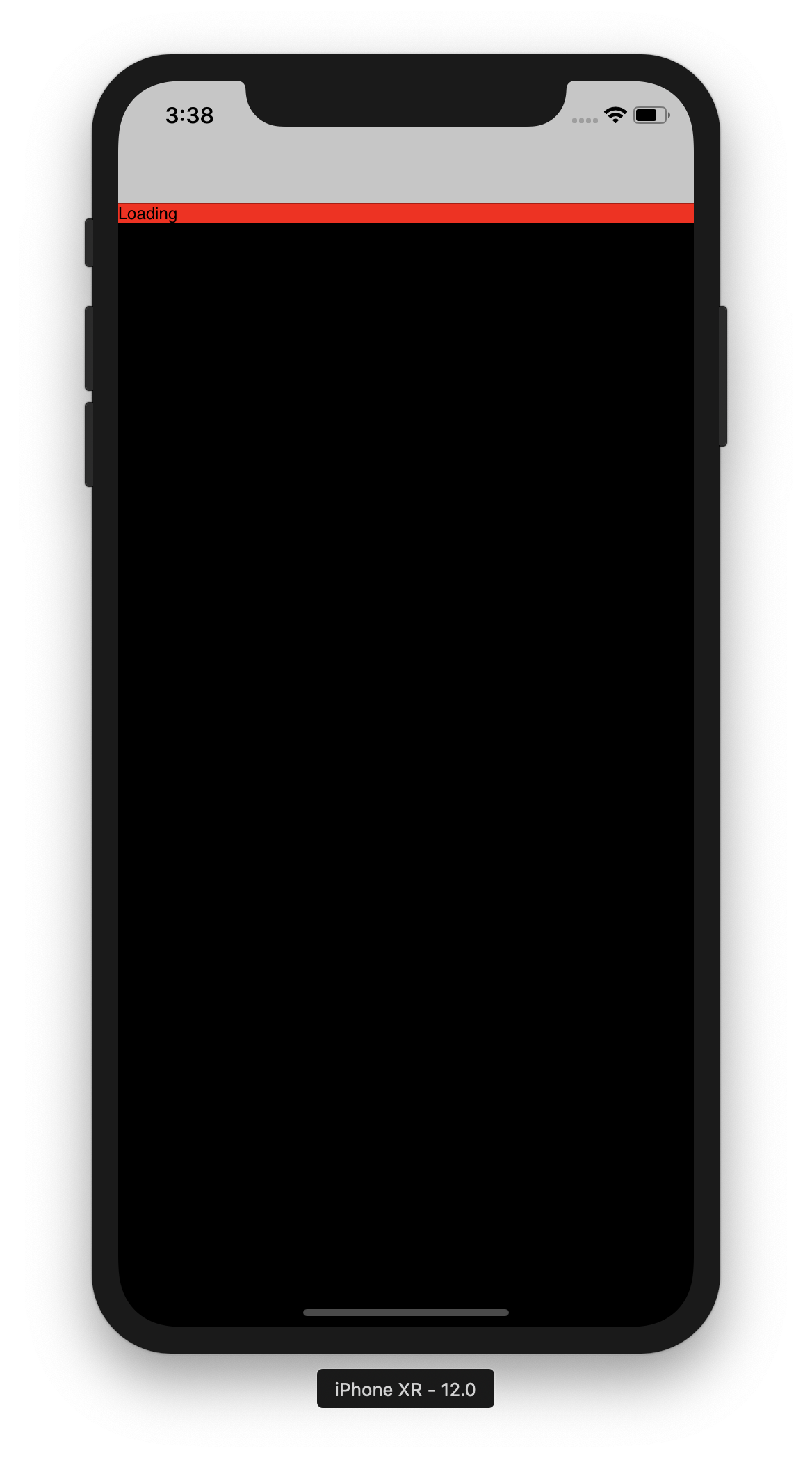 Not bad! So, by simply providing the text data I can get a view. How about making it full screen and replacing the text with a UIActivityIndicatorView.

To be honest the official documentation is outdated as I can not find anything about everything, for example CKFlexboxComponent is not there. So the only way out is to actually check the source code, which is probably even better than looking up the docs.

From what I’ve figured out, the way one creates components for views is by providing the Class type and a bunch of selectors to be invoked. Imagine it this way, if you were to create a custom view with a UIActivityIndicatorView, you might do it like:

With that in place, we have a loading screen. 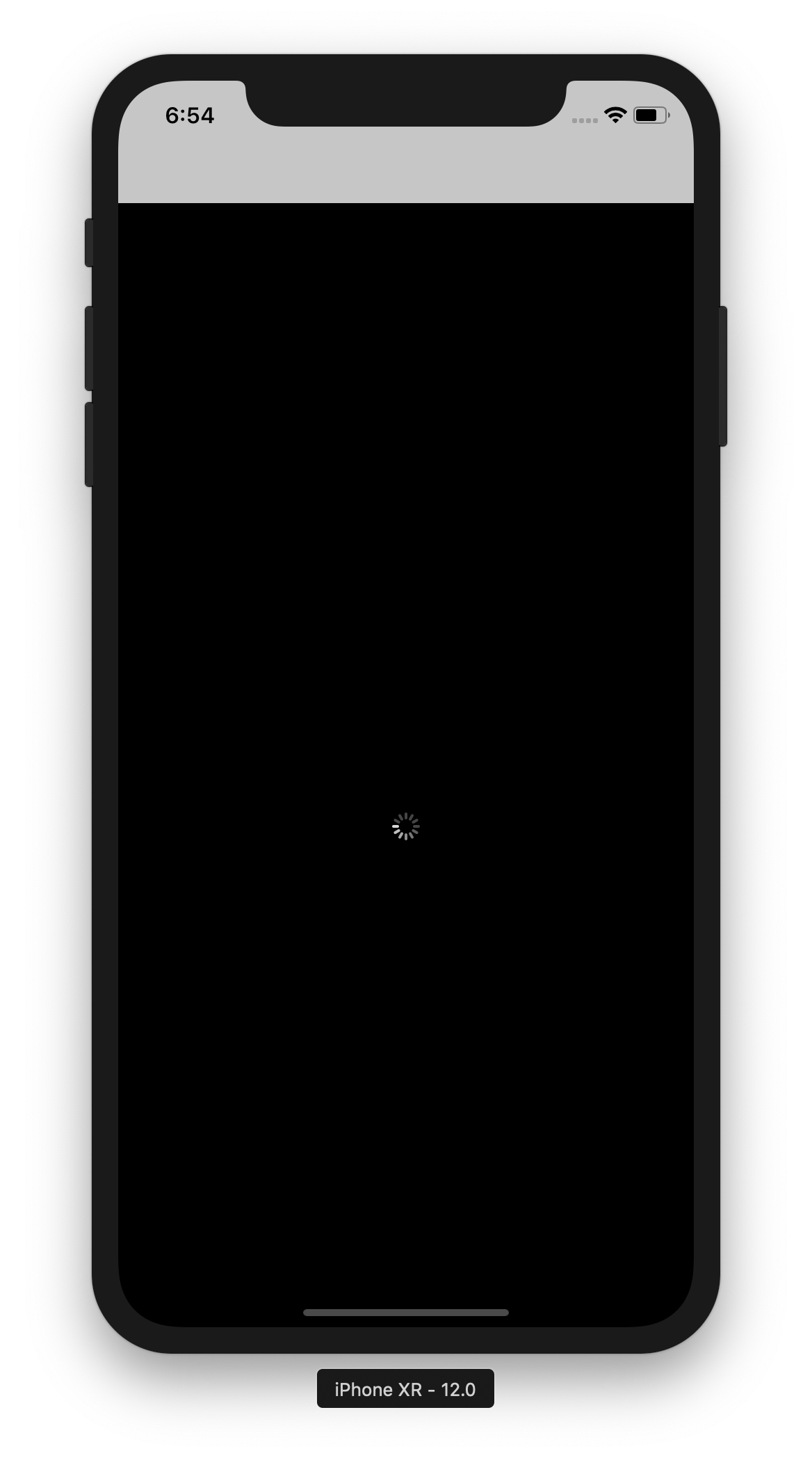 Next step is to get the activity indicator start and stop animating. Which is pretty simple 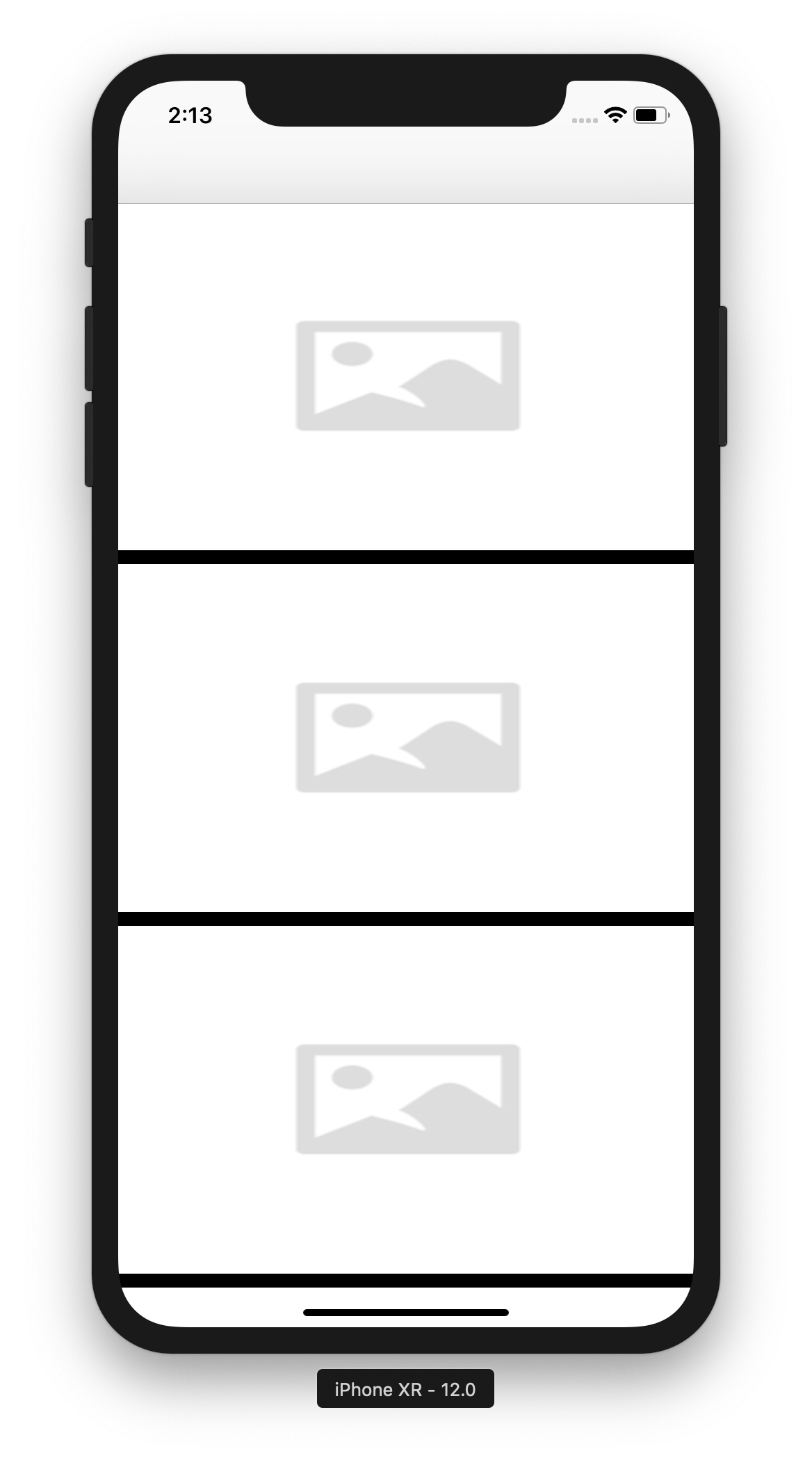 The tricky part is fetching the images. Normally we have to consider the fact that the user might be scrolling and the cell that started the network request could be out of view already, and we don’t want to render wrong images on wrong cells. So, there has to be a owner of the network callback, from what I’ve read so far that job is usually for the ComponentController, but then I also something called CKNetworkImageComponent.

To make that happen, first step is provide a concrete implementation of CKNetworkImageDownloading which is pretty close to what PANetworkService is doing already. Here is a naive implementation

And the second step is then to create the component 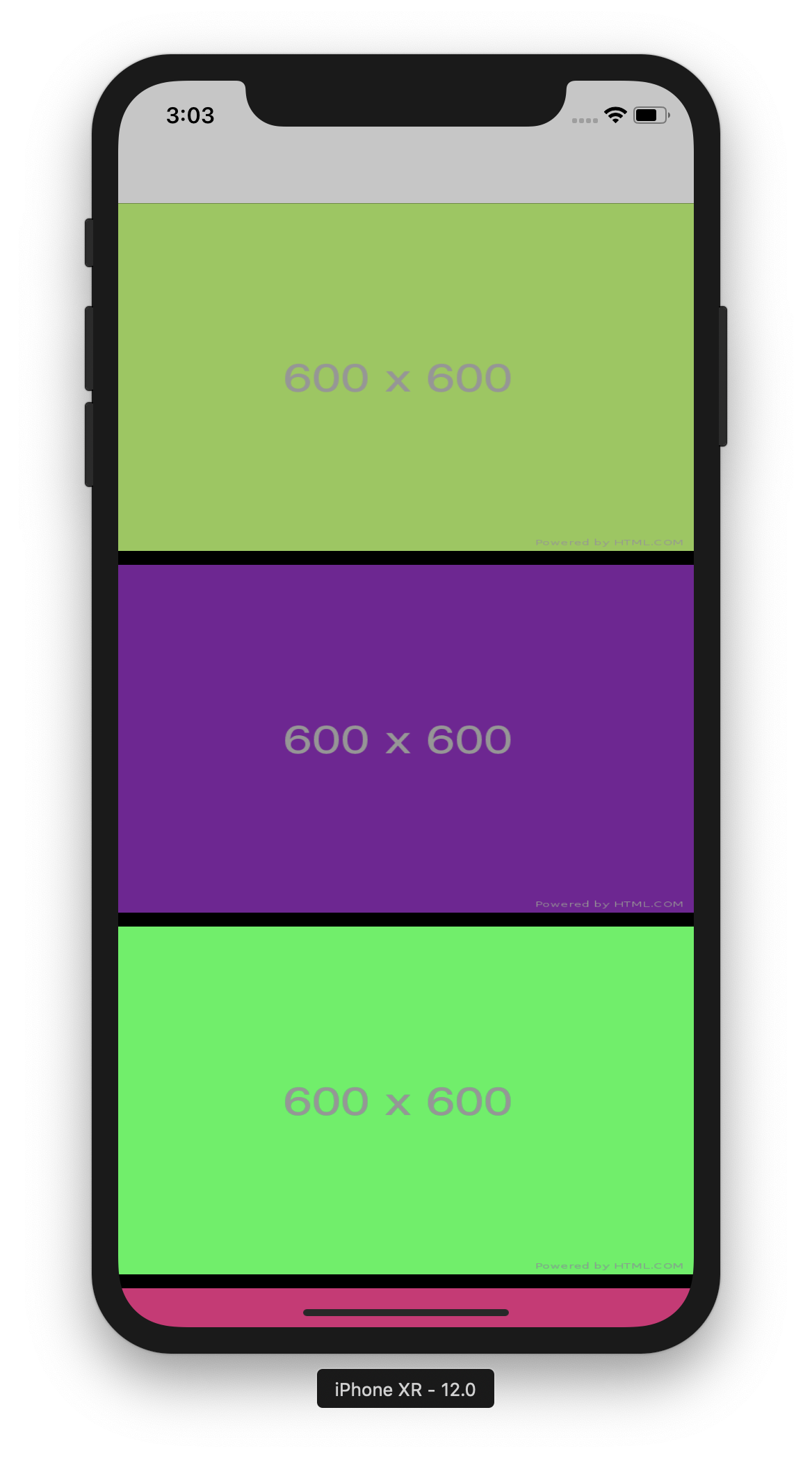 Next we want the react on whenever a user taps on the cell, and here is where CKComponentTapGestureAttribute comes into the picture. After playing around for a while, this is what seems to be working

Whats left is hooking a listener to the event. From what I’ve read about the components is that they should not be set as delegate, as they are by design short lived immutables. So I’m imagining them as being disposed off after a draw cycle. So the question is how do we handle the touch event? To understand let’s see what is CKComponentTapGestureAttribute?

So it a function that takes a CKAction and returns a CKComponentViewAttributeValue. The CKAction on the other hand is a simple wrapper around the target selector pair, maybe we can use that. Or even better if we could construct the CKAction and inject it from outside.

And then in the view controller

I’m not sure if this is how the design is intended to be.

Filling up the rest

The rest should not be hard to do. We need another view that shows the details of the photo. We can either build it using the ComponentKit, or could simply have static UIViewController. I like the fact that if we build the detail UI with ComponentKit we would not have to worry about making the UI scrollable in future if it turns out that the UI does not fit one of those small screens. Also, the fact that we can reuse the components.

Although I’m still not sure whether the better design is to have only a single UIViewController and only update the data source or have multiple view controllers. If I were to make a bet, I think UIViewController would be a better choice, as then the view caching could take some benefits or maybe not. Another question is, even if I were to pull the entire thing off with a single view controller, would it make sense to twist my arm around to get the default navigation push/pop animation by writing a fake animator class that reloads the UICollectionView as if it were a push/pop animation.

So what do I think of ComponentKit. I think its a great proof of concept that one could easily write the one directional UI, but I would not force to write the entire app with ComponentKit, but maybe only the critical screens.

I would definetely like to poke around to see how easy it is to build static screens with ComponentKit, like the ones where I know I don’t need a UICollectionView and maybe also do some animation.

The entire code is available at github.com/chunkyguy/PhotoApp sitting along the pure swift and pure Objc implementations.