I know a lot of people don’t like Xcode, or as it seems from my twitter feed. But I think Xcode is probably the best IDE out there for macOS. I’ve used it for probably 10 years now, and it has evolved pretty amazingly over time. As a matter of fact, this article is also being written with Xcode 9, since it has such a good markdown support now.

Although everyone has their personal good things about Xcode, my top 5 are:

What a lot of people don’t realize is that Xcode is also a pretty awesome editor if you wish to make a command line executable with languages it supports, like C, C++, Objective-C, Swift and many more. The ugly part is the Xcode build system which takes a while to twist around to your preferred setting.

I’ll walkthrough on how to set up Xcode to generate a command line tool with C++ without getting too distracted. 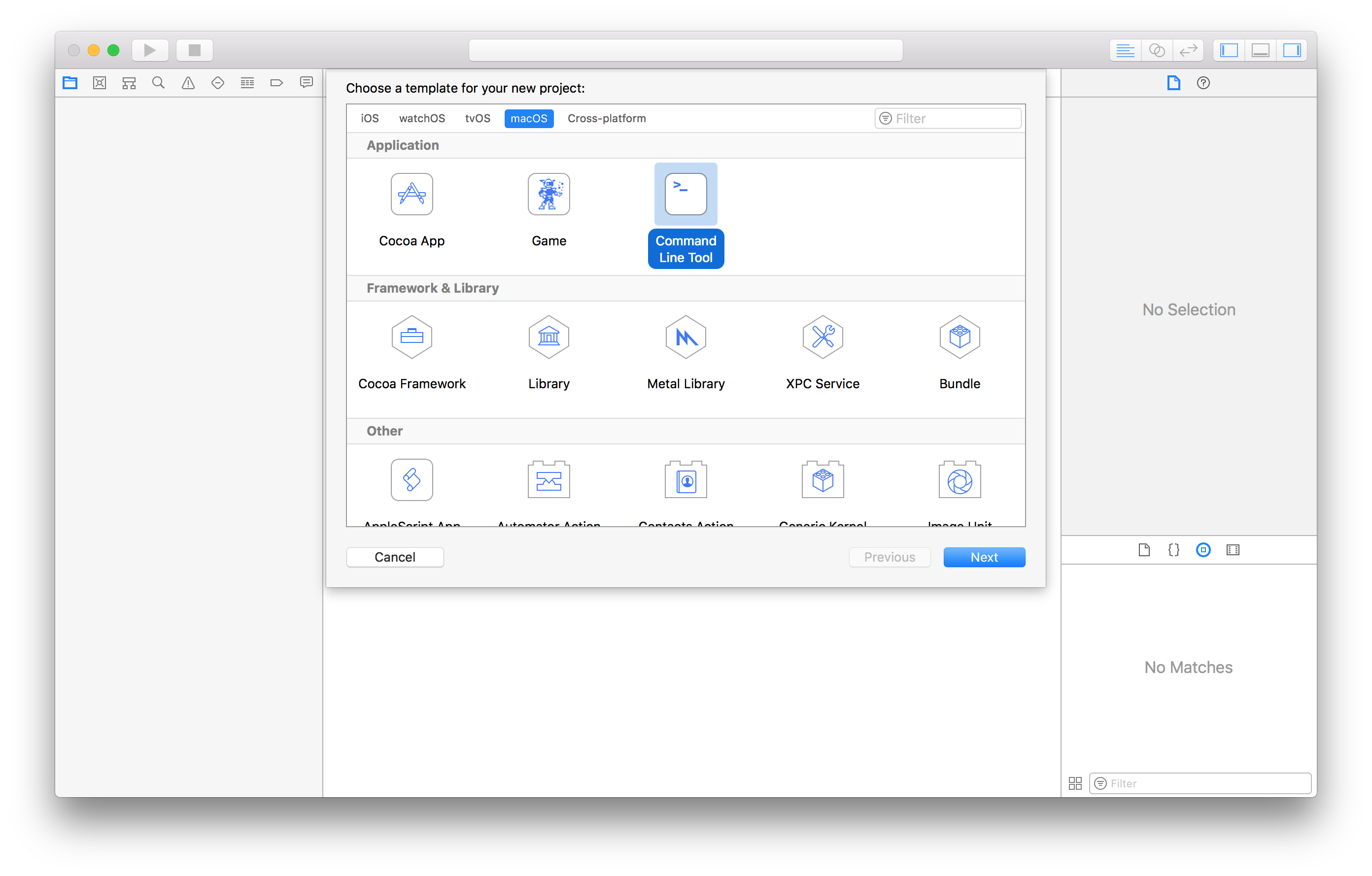 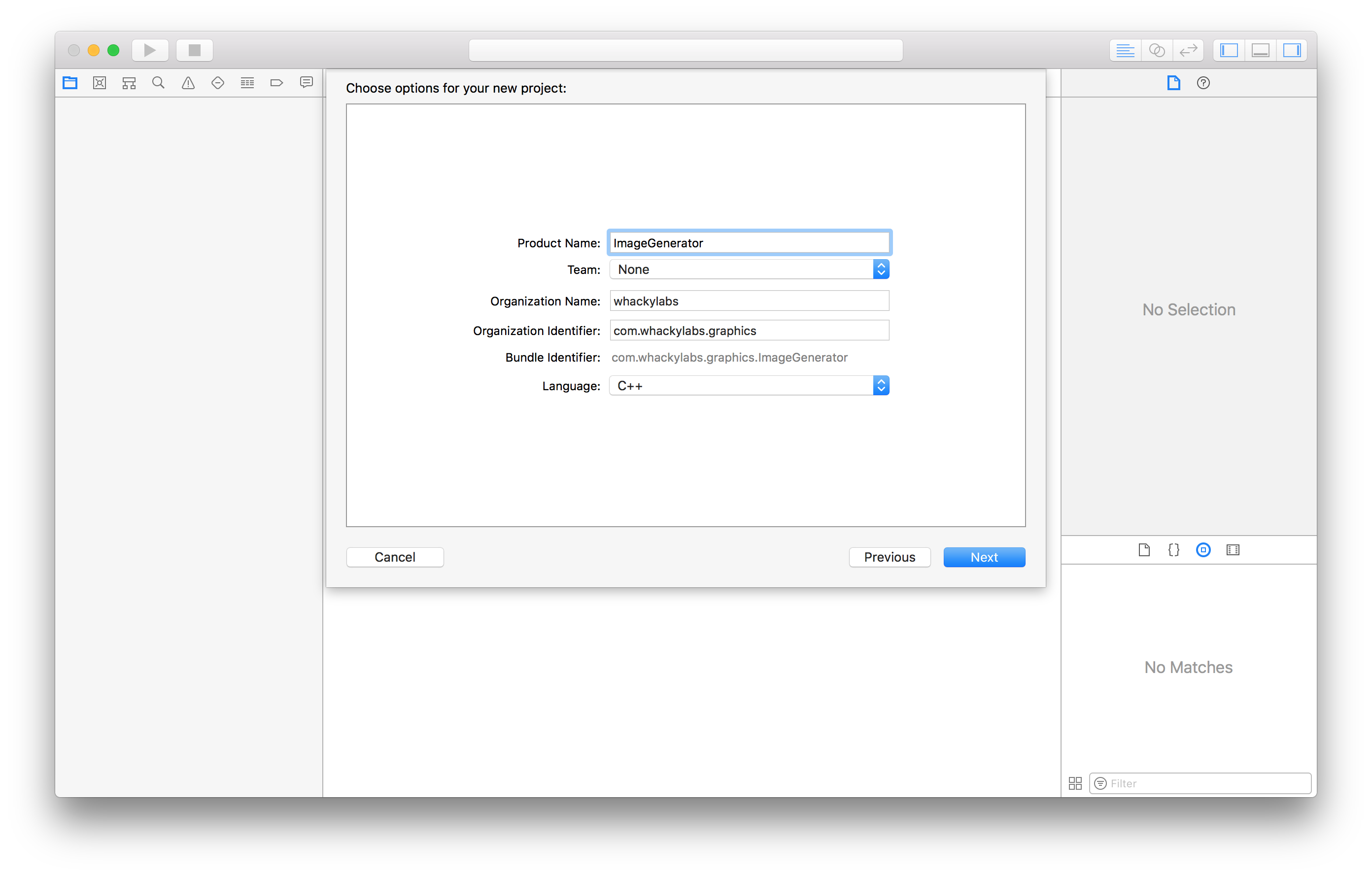 If all goes well you should see following in your console.

Let’s write some code to draw a ppm image.

Okay so the code compiles and runs fine, but where is the output? If we were to use direct command line, you could compile your code and usually the compiler would generate a a.out in your default directory. Xcode does similar, but instead of a.out it generates the <ProjectName>, in our case ImageGenerator somewhere in the build directory which is hidden far away from the source code directory.

One way to find the default build directory is to look in the Xcode preferences. 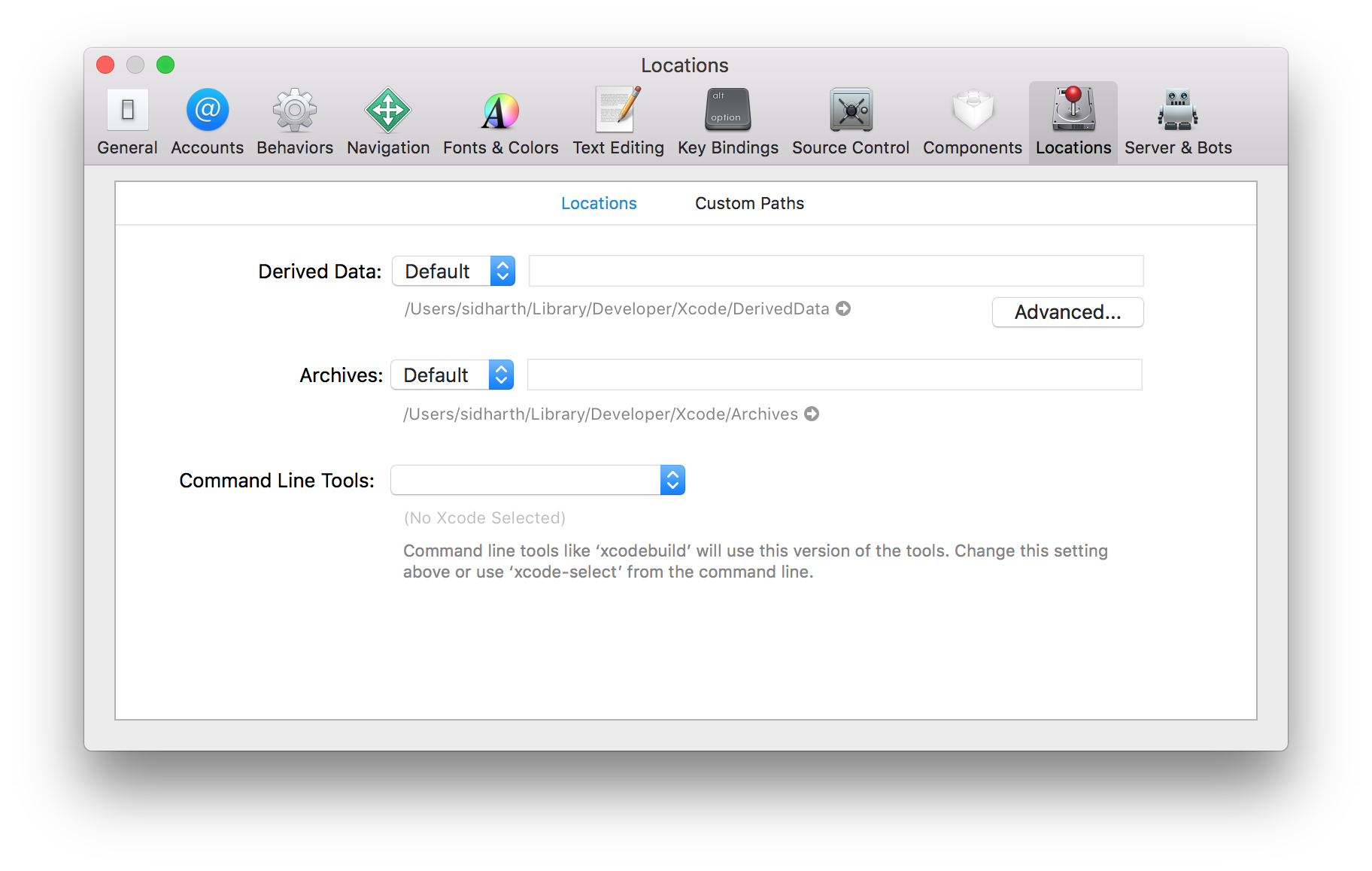 For my machine, the ImageGenerator is located in

If you open terminal, and switch to that directory, you can finally generate the output image with

Next, if you open the ~/Desktop/out.ppm with Preview.app, you can finally see your masterpiece. 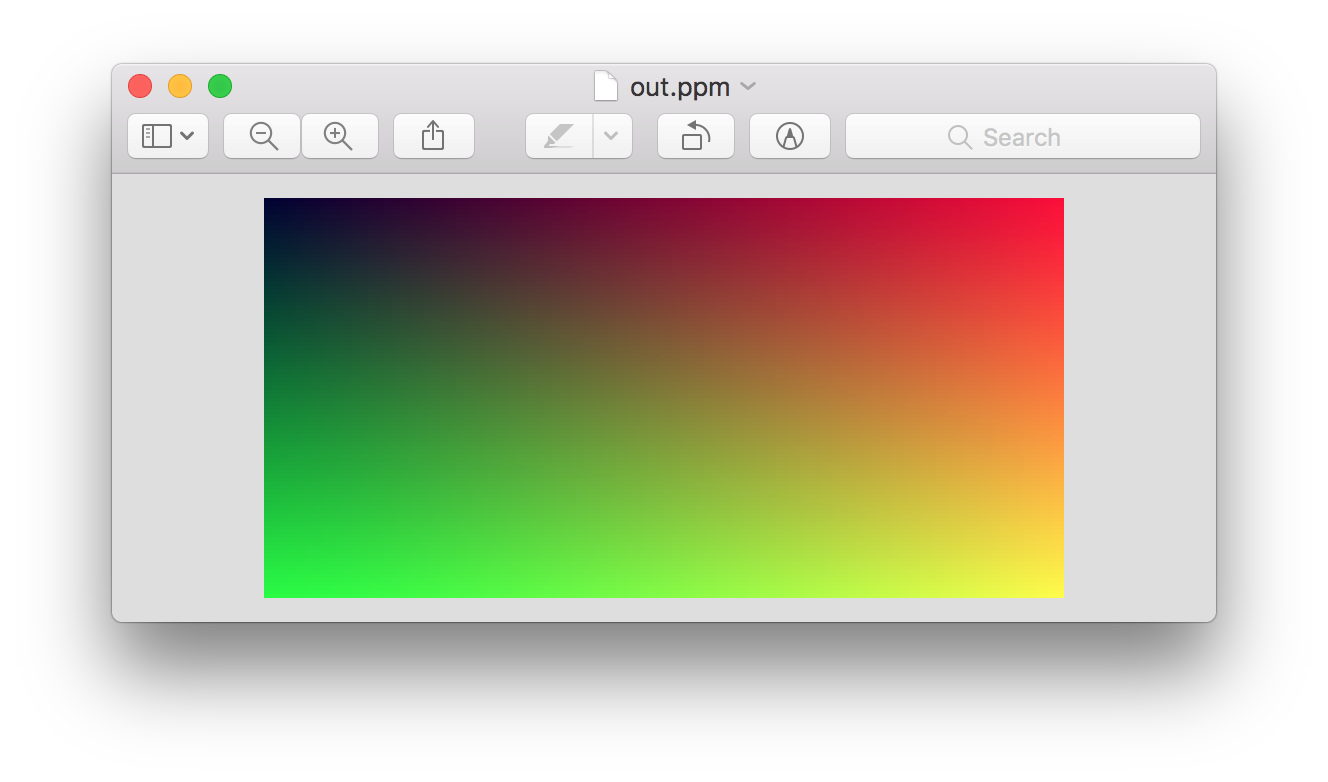 As you can already feel, this system is very tiresome. For every change you make in your code, you need to take following steps to see the output:

One of the first steps we can take is to write a shell script that does the steps above for you. And this is the job for a Xcode Build phase.

Next, add a Run Script phase 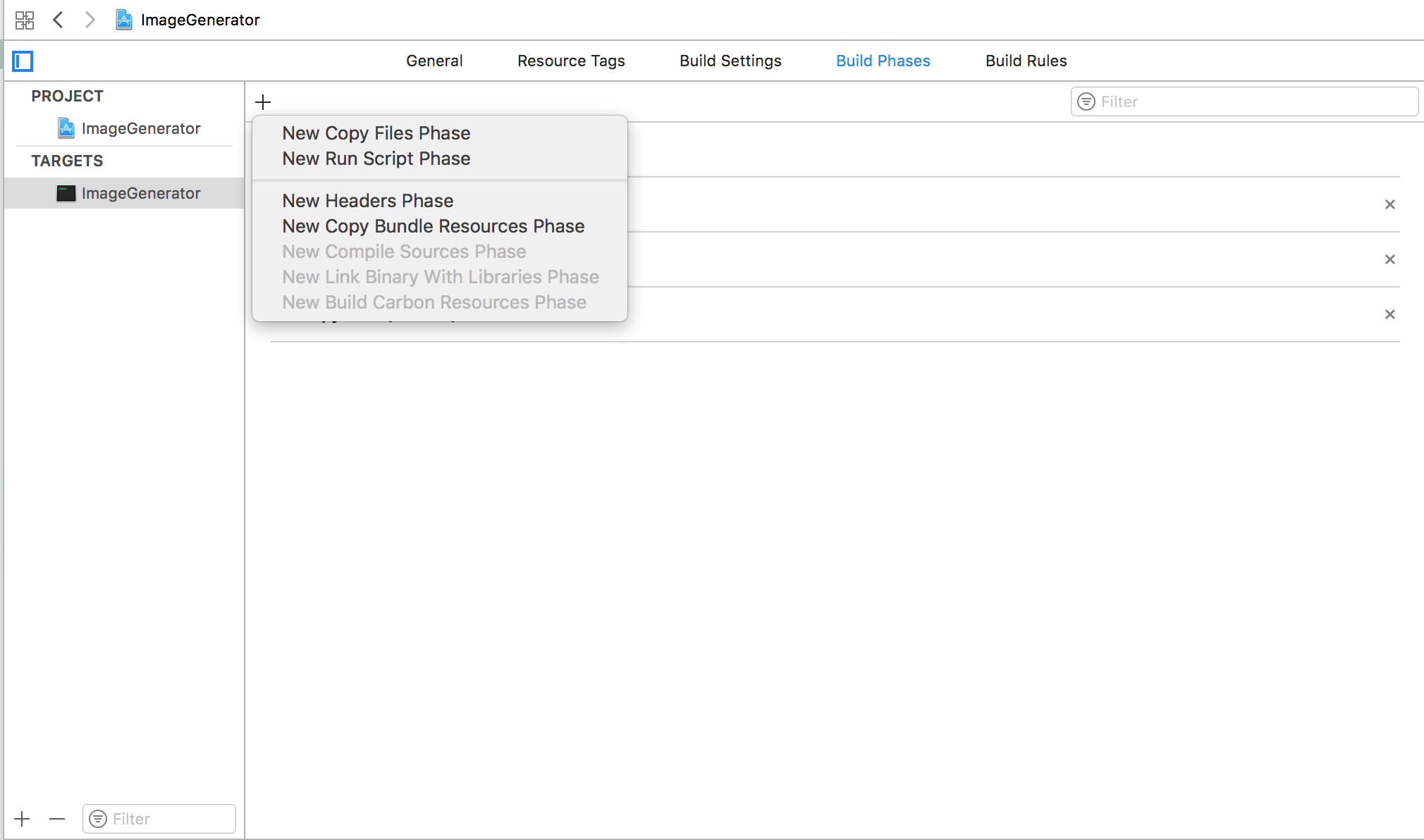 And add to the script

Next when we update of generateImage() function to

We can simply do a CMD+B from Xcode and it should run the script as well. And if all goes well, by end the output image should be updated. 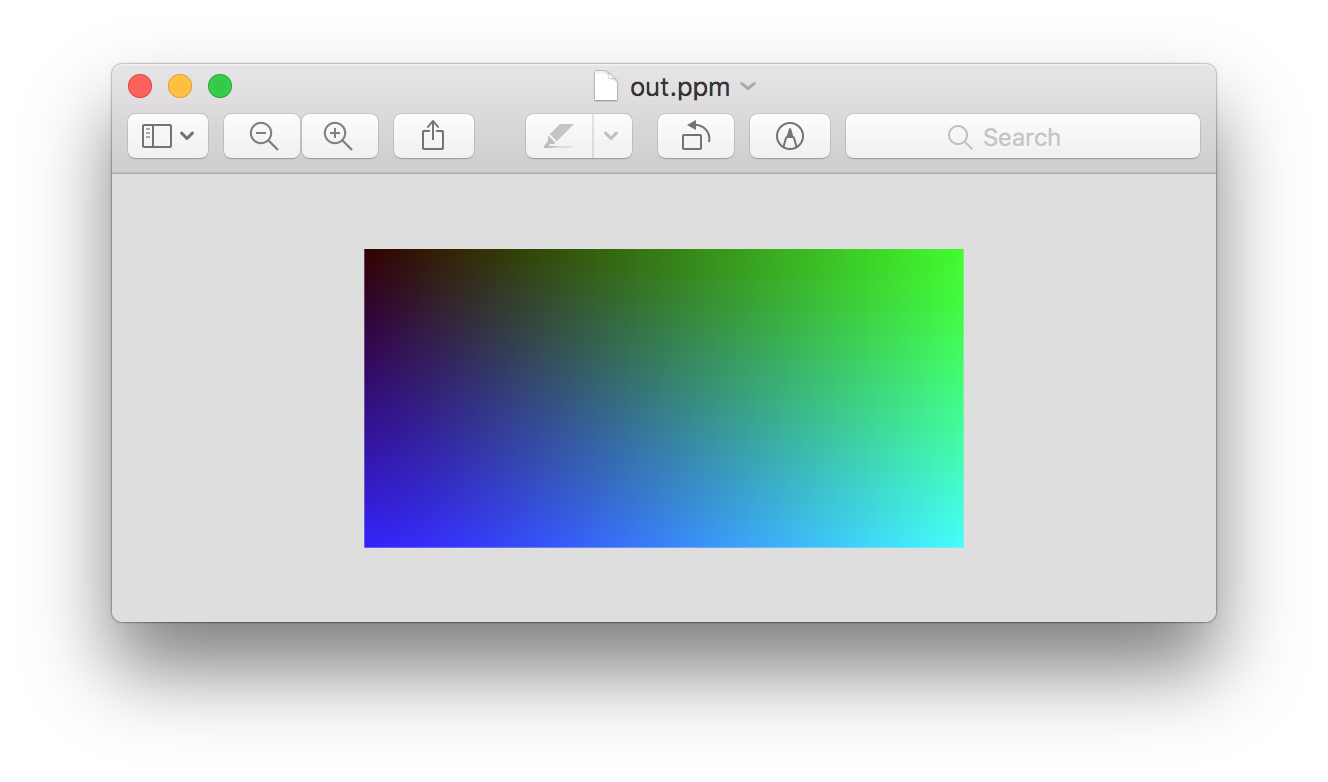 This script works fine, but it has flaw in it. The output is generated after the entire Build Phase is run, which happens after this script, as this script is also the part of Build Phase. So, every time we run the script, we are actually copying and executing the last executable generated from the last build. So, you would need to run CMD+B two times to see the output from the latest build.

You can also see it as follwing steps happening over time:

This might not be a problem if you Compile Phase takes little time. But, if your codebase is significant, running build twice might be too much. 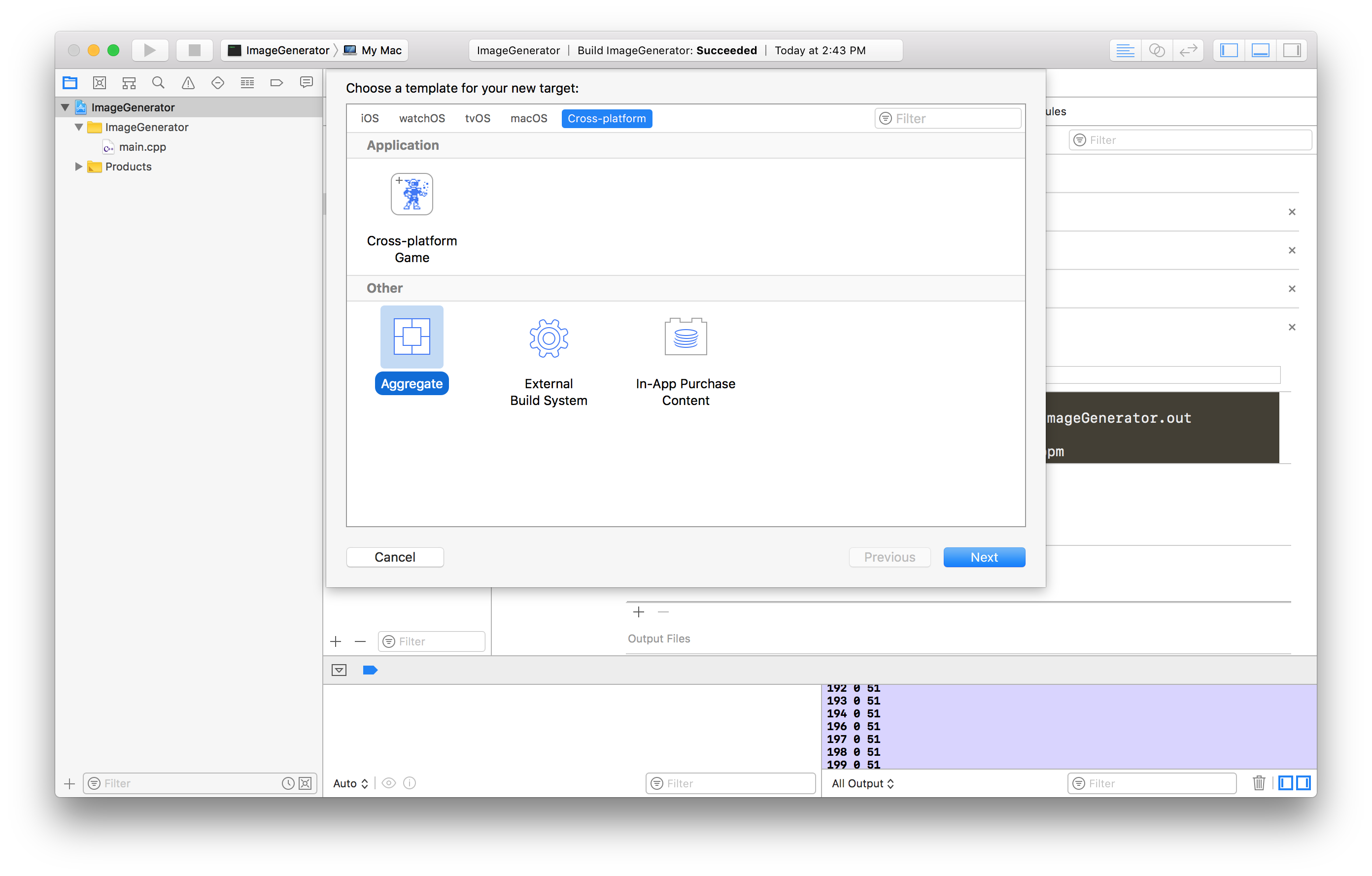 Let’s call it ImageGeneratorOutput. Similar to our main ImageGenerator target, lets add a Run Script phase here. The only job of this target is to run the script. So, move the run phase into this script.

And out script in the Build Phase of ImageGenerator can now be safely removed. 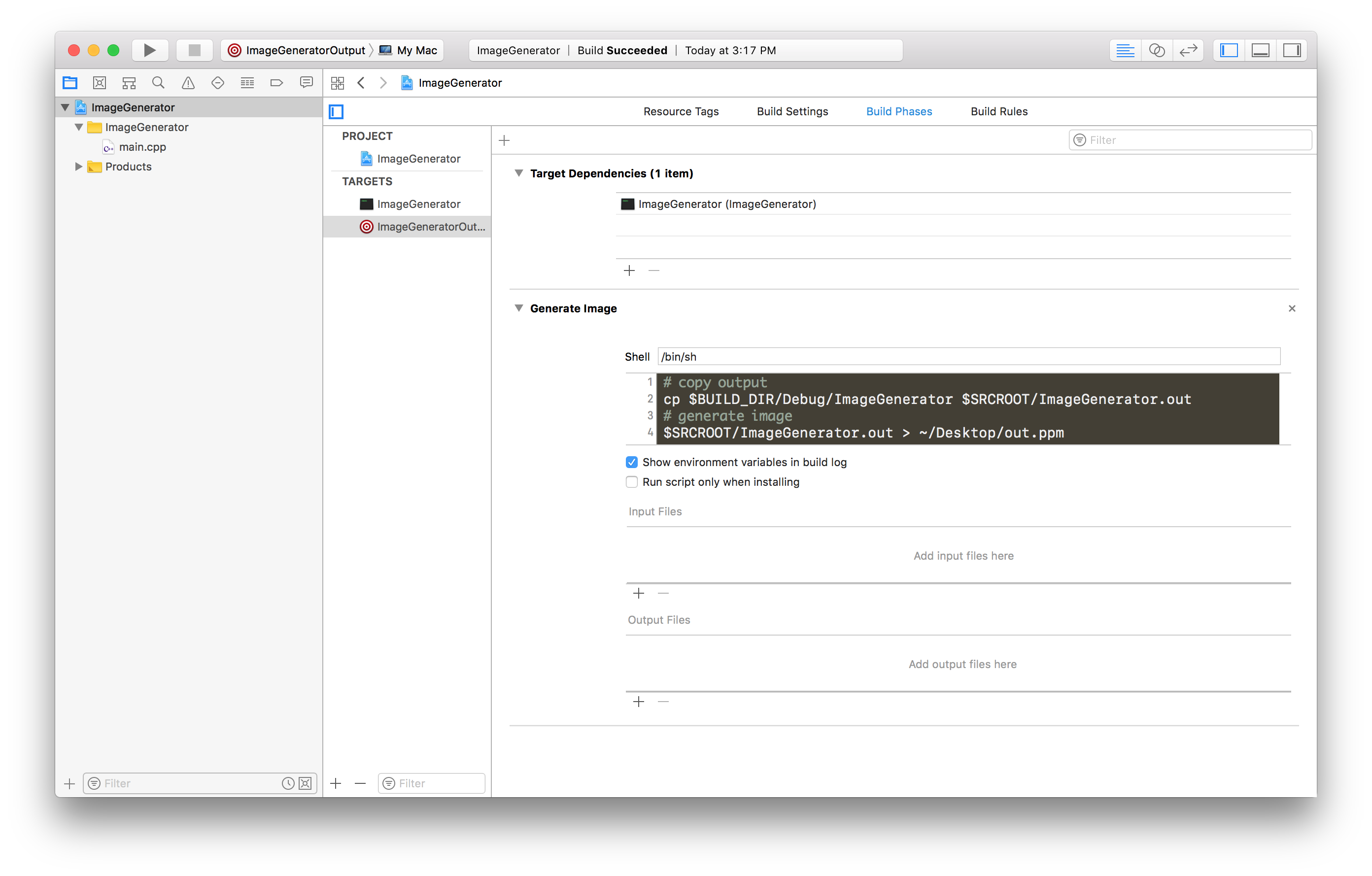 Now, if all goes well and run CMD+B again with ImageGeneratorOutput scheme selected, the latest output image should be generated. To, understand what changed, lets take a look at our updated flow

I hope this article inspires you into using Xcode more for your command line apps. The source code for the project we built here can be found at github.com/chunkyguy/demo-ImageGenerator